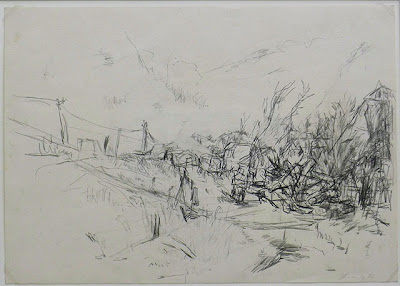 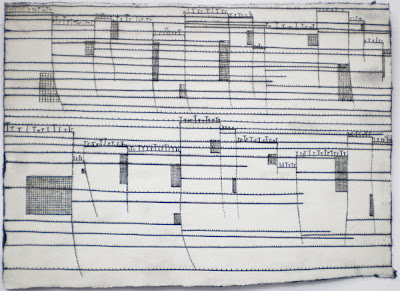 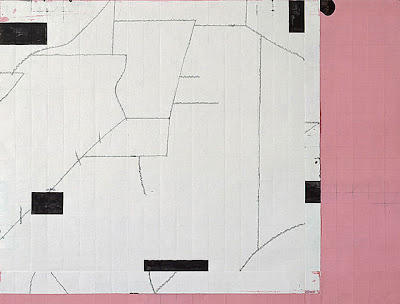 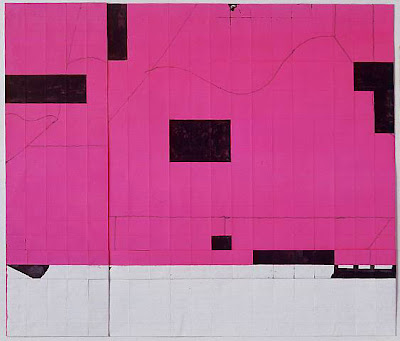 (John Yau, "What Happens When There is No Center and It Cannot Hold?", 2012, in Hyperallergic)


This is from an essay I wrote about Schimansky’s drawings in 2010:

Instead of using a pencil or crayon to make a quick or delicate line across the surface, he will roll, twirl, or push the tip of the medium against the paper. The changing tension and friction between medium and surface becomes unpredictable, causing the means to become something that the artist cannot completely control. In fact, I feel there are moments when the artist functions as a conduit between means and medium, when he must be attentive to the give and take between the drawing tool and the paper’s topography.
By establishing a particular, often awkward orientation between the medium and the surface, the artist goes a long way toward denying any kind of fluidity or mastery. By holding the instrument at an acute angle to the surface in order to make downward moving lines or rolling the drawing tool to make a twisting, rough-edged line, Schimansky undermines the movement of a pencil or paint stick across the paper. Within these and other processes, he often stops and starts, with each stop signaling a transition from one kind of line or shape to another. In some drawings, it’s as if different abstract hieroglyphs have invaded each other’s territory, forming a new hybrid language.  Schimansky’s drawings aren’t unitary; they don’t resolve themselves into an easily consumable composition. They demand to be scrutinized, to be disassembled and recombined in the mind’s eye. And it is this connection between eye and mind, and the visual and the tactile, which lifts Schimansky’s drawings and “Foldings” into their own resonant realm.

Schimansky’s drawings are notable for their breaks and transitions in conjunction with different kinds of forms, marks and linear signs. These shifts and ruptures result in a collection of polysepalous fragments in which family resemblance is tenuous at best. Instead of investigating the more familiar path in which repetition and variation are paired, the artist brackets repetition and its seeming opposite, rupture. This surprising combination results in drawings unlike anyone else’s. The viewer senses that the logic unfolding in the drawing, and to some extent governing its outcome, is neither singular nor discernible. Even when the drawing feels incremental, the result of the artist repeating similar marks, he always introduces a different order of marks. In counterpoint to Minimalism, and its emphasis on paring down, Schimansky works incrementally, but seldom along a single trajectory. It’s as if one thought or perception interacts with another and another in no predictable way.

In the above-quoted passages, I did not pay enough attention to the “foldings, which Schimansky began making in 1980. The finished “folding,” as presented, includes sections that have been drawn over as well as parts that are still folded over and thus remain hidden, giving the paper a layered, sculptural dimension — it is both a drawing and a shallow relief, a hybrid.
Because we are unable to see the entire sheet of paper, we become acutely aware that our view is both complete and partial, and that the relation between the two eludes our grasp. It is an experience that resonates with our current understanding of the universe, and of the existence of things and forces (dark matter, for example) that remain partially hidden in the realm of conjecture.
Schimansky’s “foldings” are unlike anyone else’s drawings. They advance a world that is simultaneously visible and unseen. Some forms are connected;  others seem to be untethered to what’s around them. And yet, the drawings never strike me as arbitrary. Decisions have been made at every step of the process. They just don’t add up in ways that we are used to, and find comfort in. I suspect that Schimansky recognizes such comforts are an illusion, that we can never construct a sanctuary that is perfect for every occasion.
*   *   *
Is it getting harder to believe in something, anything? Is this why so many young artists settle for parody and citation?

When Hanns and I talk about a “free line,” he often asks why an artist would want to submit to an external system. Systems aren’t just theories about art — they are repressive ideologies which offer a false sense of security. In this regard, he agrees with Richter and Rauch. He doesn’t agree, however, with their use of oil paint and the large scale of their works.
Hanns doesn’t make drawings because he is modest, though modesty in this day and age is not necessarily a bad thing. Look at Raoul De Keyser or, closer to home, Thomas Nozkowski, both of whom the artist admires.
Hanns’ has a voracious appetite for art. There are four tall piles of art books on a table in his studio. In one pile, a Barry Le Va monograph lies on top of one devoted to Gaston Chaissac. He loves their work, but has no desire to be like either. Hanns’ drawings are recognizably his, but he doesn’t have a style.  And, in that sense, he doesn’t have a product. Perhaps that is one thing he is after when he asks, “What is a free line?”