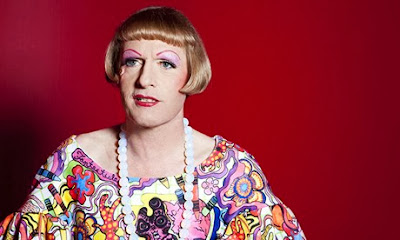 How were you invited to give this year's Reith lectures?
I sat next to Gwyneth Williams [Radio 4 controller] at a dinner about a year ago and I must have popped into her consciousness. She phoned me up after that and asked me quite formally. It's quite a big undertaking, and as a Radio 4 fan I knew the import of it. But I thought, "Yeah, I'll have fun with that." I'm always open to any kind of establishment position because I think it's an opportunity for some sort of mischief.

Were you not daunted by the impressive cast of previous lecturers?
I haven't been to Oxbridge. I haven't even been to a London art school. My qualifications are pretty meagre for such a brief, but I just trust in my sense of what I'm interested in and my mission of clarity. My only fear is that people wouldn't understand what I was going on about.

In the first lecture, about how the impenetrable language of the art world is used to avoid expressing a clear opinion, you use a lot of comedy. Isn't humour another way of avoiding judgment?
Ironic distance – you disown what you say to a certain extent. Yes, I stand accused, probably because there's nothing more shocking than sincerity in modern culture. Irony is the default position of so much of our culture now. Unless you use irony you seem quite unsophisticated because you haven't considered both sides of the argument.

Your argument is that the art world's filtering systems work because in the end talent will out. But would you feel the same way if you hadn't become successful?
Tricky question. I think part of being an artist, and part of the reason why I'm enjoying talking about these filtering systems, is to look at them when you're making art. You don't work in a vacuum. If you're a visual artist you work in a visual culture. If you're a pop musician you listen to pop music. If you're an artist you should know about the art world. It's the tribal culture you are operating in. You are part of its tradition. I often hear people say, "Ugh, the art world is not interested in what I do!" And I think, "No, it probably isn't. You don't seem that interested in what the art world does from the look of your work."

So the romantic myth of the unrecognised genius has no place in today's art world?
It probably exists but not in the west. Maybe in countries that have a developing contemporary art scene. In the west if you're at all interested in art you're going to put yourself in the way of the trawlers that come looking through the ocean of contemporary art.

Before you were "discovered", was there a part of you that thought, "I'm a neglected great artist"?
No, I was just a morass of self-doubt, like a lot of people are. And I was incredibly bitter, just like I'm sure a lot of people are now. I've got a pot in my studio that is just a bitter rant against the art world. I call it my Dorian Gray.

You have another work called the Picasso Napkin Syndrome. That refers to the point at which an artist can sign anything and it will sell.
I would never abuse that. Self-consciousness is almost the biggest thing you have to deal with as an artist. That's why many artists crash and burn, because they can't handle the attention and the financial implications of every brush stroke. If every dab on the canvas is worth a hundred quid, that's a daunting thought.

Many artists seek to conceal themselves behind a persona. Has Claire [his transvestite alter ego] helped you in that way?
Yeah, a bit. It means if I go out the door now as Claire a lot of people know who I am. But if I go out as Grayson, no one recognises me. Dressing up gees me up. It's part of the fun and it gets me into a fun mood.

You're a member of the Royal Academy, have exhibited at the British Museum, and now you're doing the Reith lectures – what is it about the establishment that you find so attractive?
Well I'm a traditional artist so I've always been attracted to traditional forms. And having my own fun with them. I don't make unusual-shaped vases. I do prints, tapestries, sculptures. I don't bring in things to the art world that weren't there already. And so I've always worked from within. I'm conservative with a small "c".

There's something slightly odd about watching Chris Patten, the chairman of the BBC, get up and sing your praises while you're dressed as Claire.
That's the rich tapestry of life. Because we contemplate something seriously and there are great institutions built round it, there's an idea that we should somehow exclude humour. I think in Britain, of all places, we should embrace that aspect of our identity. We are funny people in Britain. And therefore I've never had any qualms about using humour in my work.

But does being accepted by the great and the good not also have an effect on you?
It cannot help but. The more I'm aware of that happening the more control I have over it. You see it happening with people in the public eye who are lauded and have a lot of success. No matter how down to earth, it would be disingenuous to pretend that they hadn't changed, because if you're in the public eye you need to change your life.

Can anyone appreciate art?
Well, not instantly. That's the mistake people make, that you're going to walk into an art gallery and have a fantastic time the first time. Same as a lot of culture – classical music, ballet, literature – you've got to work at it a bit. Get used to the language and the conventions and history. I've been looking at art all my life and there are still artists I don't feel up to liking yet. I've always struggled with all those mythical fluffy paintings like Titian, partly because I'm an inverted snob.

Do you believe in the canon?
Oh yeah. There are people that at any moment in history touched on something that said something about their time and place. That's what worries me about globalisation. A lot of artists want to be global, but "global" is not a culture. If you think of globalisation as an experience it's a series of airports and shops.

You say it takes time to sort out who should be in the canon. So in 50 years it could be decided that Jack Vettriano was a great artist?
But that won't happen because he says nothing about now. He could have been painting 80 years ago. He's like Edward Hopper painting the cover of Mills and Boon. I think the artists who will go down in history are the ones who in some way respond to the moment they're in.