Of the manner of entring into the water 2 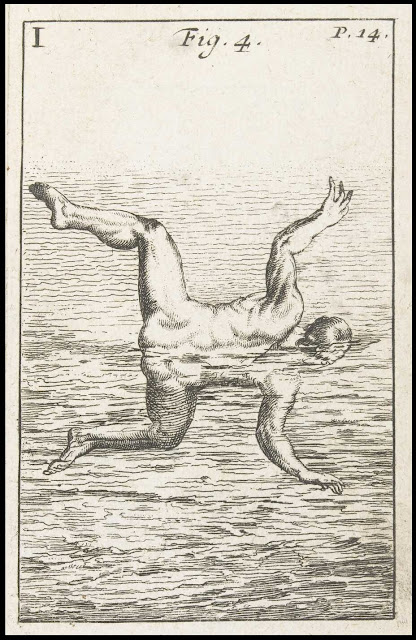 "While one reflects on those many and frequent Accidents, which thro' want of Swimming daily happen amongst us: Every one is ready to complain of the unhappiness of Man in that respect, in comparison of other Animals, to whom Nature has indulg'd that faculty, which he ought to enjoy in a more excellent degree, since it is so necessary to his Preservation.

But if we thoroughly consider the business, we shall find nothing more unreasonable than that complaint, since without doubt Man would not only Swim naturally like other Creatures, but also in more Perfection, and with more Variety, both for Pleasure and Advantage; otherwise there would not so many acquit themselves that way with such and admirable dexterity and address, as we daily see, which sufficiently demonstrates, that Man has naturally all those Dispositions which are requisite and necessary for it. [..]

This Art, which may be numbered among the Mechanick ones, since it is performed by Motion, and the Agitation of the Hands and Feet, has been hitherto exercised rather by a rude Imitation, than the Observation of any Rules or Precepts, by reason no on has taken the pains to reduce it to any; although it has always sufficiently deserved it, by the great advantages it brings to those who possess it, and in general to all Civil Societies, the consideration whereof ought to have made Men study to render it more easy to be learned, and more familiar to all men, since they may have so great occasion for it. [..]

To mention some few advantages of Swimming. In case of Shipwreck, if one is not very far from Shore, the Art of Swimming may set one safe there, and to save from being drowned. In case of being pursu'd by an Enemy, and meeting a River in ones way, you have the advantage of escaping two sorts of Death, by gaining the Shore on the other side, and so escaping from your Enemy, and from being drowned in the attempt of doing it.

But a good Swimmer may not only preserve his own Life, but several others also. An open vessel on the main sea, in a Storm may be kept from sinking by a good Diver; Or having lost her Anchors and Cables, and being ready to be cast on the Shore, may by him be haled thither, and avoid being dashed against the Rocks, and so the Lives of all in it saved; and the occasions of being thus helpful are only too frequent, as those who are used to the Seas very well know. By the same means one may attack an Enemy posted on the adverse sides of Rivers, and thereby sometimes gain a Victory. [..]

Before you go into the water, you ought to see that it be clear, that there be no scum or froth on the surface, what sort of bottom it has, that there be no weeds or mud, for one's feet may be entangled among the weeds, or one may sink into the mud, and the water coming over one's head, remain there, and be drowned.

Something yet remains to be observed before you enter into the water, in regard to stripping yourself. If you sweat when you come to the place you have chosen; or if you have sweat some time before you came, and are not quite cooled, you ought to strip by degrees, and that by walking to and fro on the shore, so that you may recover a good temperature, and by thus gradually stripping, the pores have leisure to close, and the body become in good condition, to be exposed to the air without any detriment to the health. After which you may enter into the water, and Swim according to the following precepts."